The difference between a “nice guy” and a “nice” guy

There are a lot of guys in the world who love to complain about how they always get friend zoned because they’re “too nice”. I’m not gonna talk about the friend zone, cause that’s another subject in itself, but I’ll talk about how I hate the mentality of these so called “nice guys”.

Now, let me preface this by saying I was a “nice guy” in middle school. I had a girl interested in me in 8th grade, and though she was well aware that I liked her and me her, I let her set the pace for the progression of our relationship. I was content to sit back and hoped to enjoy the ride to relationshipville thinking that just continuing to do whatever she wanted was the key.

Looking back on it, I can’t help but laugh at how bitter I felt when she ended up liking someone else. This was one of the few things that I’ve resented in my life, but it was a great lesson that every “nice guy” needs to learn and I have carried it with me. The creed that “nice guys” live by does not just relate to their relationships, but how they handle themselves in all situations in life. And it sucks.

Here is what all “nice guys” should know:

1. If you want something, you should let it be known, and you should reach for it. If you don’t get it, at least you can say you tried. 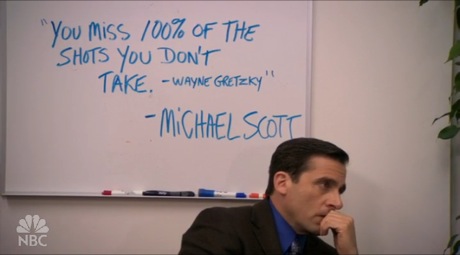 Don’t disqualify yourself by not taking the shot. Let the employer or the school or the girl reject you. Don’t reject yourself.

Not having preconceived notions and taking action to see what actually happens is a leap that you have to be brave enough to take if you want to see the results.

2. Along the same line as having no preconceived notions, don’t do nice things because you are expecting something from being nice. Girls, jobs, and pretty much anything you try to do is not a simple mathematical function. You can’t just plug in nice things you do and expect to be rewarded in the end. This is why most “nice guys” feel miffed when it doesn’t work out. They put in all this effort expecting some kind of return for their effort and get nothing. Tough noogies. That’s life. Sometimes you put in a ton of work and you don’t get shit for it and someone else gets promoted.

After you get over that fact, you reach the final, most important step which leads you out of being a “nice guy”.

3. Be nice because you are a good person and you’re actually nice, not because being nice will give you something. “Nice guys” tend to say that “assholes” get everything that “nice guys” should have because “nice guys” put in more effort. Being an “asshole” is not an active state of mind. It’s pretty much just apathy. Case in point, assholes never stop to think about whether or not they’re assholes, because they don’t care. That’s why they’re assholes.

Actively being an asshole is actually a terrible idea and you won’t get anything for it. Assholes just put so little effort into what they do that they can afford to fail tons of times before receiving something good. There’s so little investment that they don’t care about the outcome. That’s the trait that “nice guys” should try to copy.

Refer to myself. Why do I call myself the nicest asshole you’ll ever meet? Cause I don’t care what you think. I’m apathetic. Not that I don’t value your opinion, but at the end of the day, the only judgment of my actions that I care about is my own judgment. If at the end of the day, I believe that I’m a genuinely nice person, that’s good enough for me.

Have no expectations. Girls aren’t soda machines. It ain’t insert 2 compliments, get a kiss. Insert 5 favors, get a relationship.

People can subconsciously recognize when you’re nice because you want something and it’s a huge turn-off. Trust me when I tell you that no one would say you’re “too nice” unless they can subconsciously sense that you’re being extra nice to them because you expect your actions to curry favor. (curry favor looks like curry flavor… what a strange idiom).

So at the end of the day, the idea is to be yourself, and to make yourself someone worthy of being. Better yourself because you want to better yourself, and everything will fall into place. When you believe with all your heart that you’re a good person, other people will believe it too.